A little bit of background: After Polaroid stopped making film in around 2008, the only game in town for pack-film was Fuji. They produced FP100c color film, Fp100b black and white film, and FP3000b black and white film. It is amazing film. Not only does it have a great image quality overall- surpassing that of integral film(my opinion), but it was self terminating. That means the time needed for peeling the film apart was more flexible than Polaroid film was. As of this year, Fuji will have discontinued all lines of pack-film. There have been several attempts to convince them otherwise, but with no success. This leaves pack-film shooters in a scary place. With a dwindling inventory this idea may help a bit.
I have been doing this for a couple of years with fairly consistent success. I take a pack of ten shots (Fuji FP100C) and using a photographic changing bag, turn it into ten packs of one shot. Why? Since I have a rather large collection of Polaroid cameras, I like to make sure they work before I commit to shooting with them for the day. I also like to do one-off experiments. Some of my cameras are fairly unconventional, designed for the lab or designed for making passports and driver's licenses.
What need do you have of one shot packs? Maybe a family member just came over and you don't want to take a whole pack out of the fridge. I know I sound cheap, but I was not among the thousands who were able to dig into their wallets or pull out their credit cards and buy a bunch of the now endangered and limited Fuji pack-film stock by the box. Maybe you need to test that 2 dollar yard sale camera you just got home, and you don't want to risk wasting the whole pack(You can take the dark slide out of a pack, but I challenge you to put one back in!).
Like most artists, I am a pack-rat. I have saved every empty pack I shot. I also save all old negatives in a box in hopes of someday recovering them( I have done it once, and I can assure you- it works!). For some unknown reason, I have also kept most dark slides! What you will need to do this is ten dark slides left over from the packs, 10 empty packs, one full pack, and a changing bag. I find the Fuji dark_slide to be better than old Polaroid dark_slides because they are thicker. I also find Fuji packs to be easier because they are all plastic, but you can use Polaroid packs if that is all you have. If you are someone who has done lots of film unloading in these bags this should be fairly simple. If you have a pack of expired Polaroid pack-film, experiment with that in the light so you can see how things go together. Below are photos of four of the one shots already loaded, and a couple of photos of an old pack taken apart. Note what the tabs look like when separated from each other. 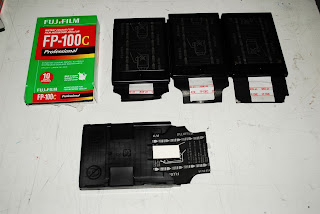 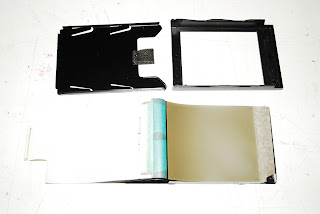 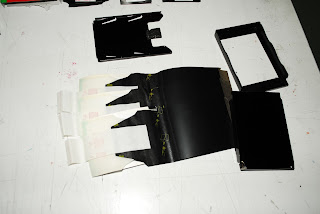 Put the 10 empty packs, 10 dark-slides, and one full pack of film in the changing bag. Pop the full pack open by gently squeezing the sides. Lift out the center that has the film and paper wrapped around the plastic film plane. There are paper loops that later become the numbered tabs on the film- they will be used! First gently tear tab #1 off of the back of the dark slide. Move the dark slide out of the way. Just like you removed tab one from the bottom of the dark-slide, work your way through the stack disconnecting just the top of the tab from each of the 10 shots(see the picture). You are separating the loops, not getting rid of the tabs.
Next lift the first shot free of the film plane, careful to keep it folded. On the negative side there is a small staple. Gently rip shot one from the staple. Now just re-package that shot in an empty pack you open up. Wrap it snug so the negative will get fully exposed. Add the dark-slide over the film, then close up the packaging. When you are done with this step, the dark-slide and the tab should be hanging out one side. Do this to all ten, and you are ready to bring them into the light.
Of note: Obviously by now you have noticed that you need only 9 empty and one full pack- you can immediately re-use the full pack. Also, the negative is now un-tethered by the little staple, so it is possible that it could be yanked a bit by the dark-slide. This has not been my experience with over 50 single shots, but if you are concerned about it bring a bit of scotch tape into the bag and apply a bit to the papery edge which will tear away. Also, if you haven't already, take apart a junk pack in the light- it will all make more sense.
Hopefully this will help someone with their process, I know it has worked well for me!

PS. I just realized I left this blog entry with all kinds of doom and gloom. There is light on the horizon for pack-film. Florian Kaps, formerly of Impossible Project fame and now working with Supersense.com is now building an analog products institute and their first order of business is recreating pack-film! Another group, Catlabs of JP, has also promised to make pack-film! So my idea of packfilm one shots is just a way to bridge the gap, because I feel confident that these guys can bring back our pack-film!
Posted by Aaron at 12:48 PM