Hacking the Impossible I-1. The camera deserved it and had it coming!

I was so excited when The Impossible Project released its new camera. The I-1 was definitely a step in the right direction for 600 film cameras. There had never been a fully manual 600 camera. The closest was the SLR680, and it was mostly automatic.
I waited a long time to get mine, as they were 350 dollars new. Eventually, my time came, and I got one cheap. It was “broken”. It just needed a reset and I was off to the races. This camera requires that you have an I Phone or an android phone with the appropriate version in order to access the manual features. Yes, I said you need a smartphone to use your analog instant camera to its fullest! It also has a built-in battery, so like a phone, you have to charge it up regularly if you want it to be available for spontaneous shooting. 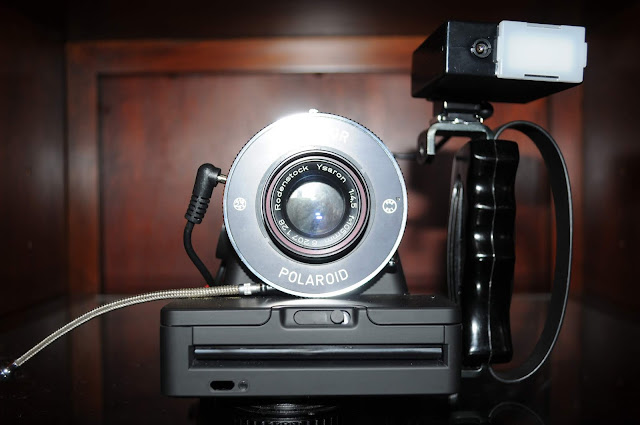 My first experience shooting with it was in the winter outdoors. I was shooting images of a house, and it was an awful experience. My fingers were going numb flashing between holding the camera, using the light meter, and choosing my manual settings on my smartphone. I nearly dropped the camera and my phone at different times. I had even considered gluing the phone to the camera. 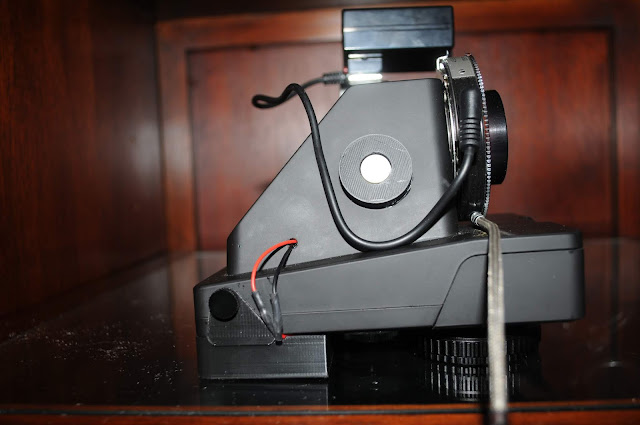 Both the battery holder on the bottom and the eject button were 3-D printed.

Later, I decided to accept that manual and phone features would have to wait for studio settings with a tripod. I tried using it as a point and shoot, but the autofocus was slow and inconsistent- often ruining shots. To make matters worse, whenever I went for the camera, the batteries would be drained demanding a charging session. 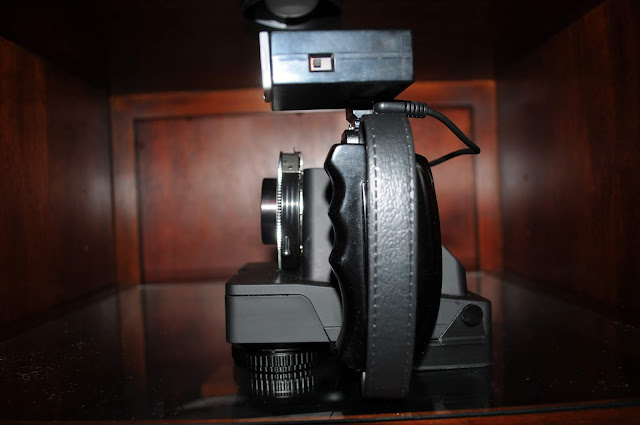 Yet another thing that bugged me about this camera. Some features were never fully available to me because of phone incompatibility! I bought an android phone with the “correct” version of android, and the light meter feature would not work. I contacted Impossible and they told me that my phone was too old(it was new), so I bought a brand new android phone with an even newer version of android and it did not have all of the features, either. When I contacted them about this, they indicated that they could not possibly design software to work with all of the hardware out there and gave me a free pack of film. It is a good thing I bought this camera for a song because if I had paid the 350.00 retail I would have been pretty pissed about just getting one free pack of film. 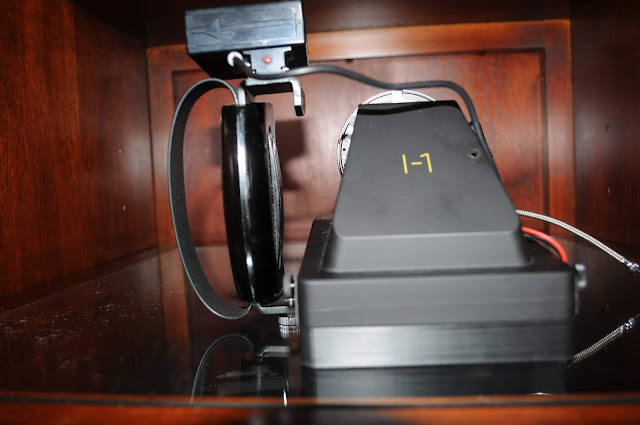 Though the look of the camera was wonderfully designed, the viewfinder was also woefully inadequate. It was designed based on an old Zeiss camera with a flip-up finder and was challenging and near impossible to frame quickly. I fixed that for myself by designing an interface to a viewfinder from an old Polaroid Colorpack camera. I still sell these as replacements- I have probably sold more than 50 over the years. 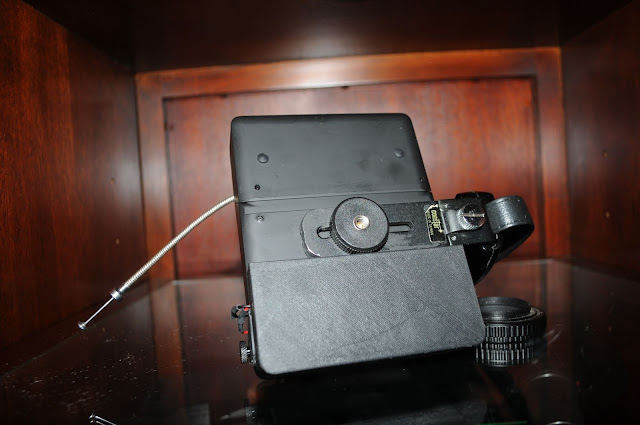 Adding insult to injury, eventually, the camera battery tanked and it would require a full charge to shoot anything, and even after a full charge it would not show fully charged!

The ideas and goals leading to the I-1 were good, noble even. The execution left much to be desired. So I hacked it.

Though I would rather the Polaroid Originals design team do this for me, they have shown with their subsequent release of the One Step plus that they are set in their ways! The One Step plus is a One Step 2 with most of the features of the I-1. I want a 600 or I Type camera that has full manual controls and replaceable batteries. I want another stupid phone app like I want a hole in my head!

This modified I-1 is a simple proof of concept. I will likely build others eventually, but for now, it serves all of my holiday shooting needs! Though this is not meant as a tutorial, here are the steps I took: First I just removed just about every screw I could find and took it apart. Then I got rid of all the electronics, except the motor. I widened the hole that the original lens mounted in and mounted a 105mm prime in its place. I used black adhesive sheet foam as a light-proof gasket. That is all I did to make a manual camera!

The only thing left to do was run the film eject motor. I wasted a lot of time trying to slip and solder a tiny momentary switch into the original shutter button housing, but I never succeeded. Instead, I 3-D printed a button mount and used a simple momentary button that could be held down for the eject and released to stop ejection.

Years ago I dreamed about creating a fully manual plastic SX-70 box-style camera, as well as a fully manual 600. I ran into significant problems with those cameras and had to scrap the idea. There are good reasons we have never seen those conversions. First, the motor is in the body close to the lens, and that does not allow for a decent manual lens to fit. Second, it is challenging to dial in the focus, as you have to cut a hole in the bottom of a junk camera to see a ground glass, then move the lens to another camera for final mounting. Third, there is a ton of dremelling needed to get rid of excess plastic and give the clearance necessary.

The I-1 is different. The only cutting I did on the whole camera was just opening the lens mount. That is IT! I drilled a small hole in the side to run the battery wires. Easy-peasy! The motor is located in the film door, well out of the way of the lens. The entire circuit consists of four aaa batteries in series, a momentary switch, and a motor.

And here is the best part: dialing it in to focus is easy to do. The bottom of the camera comes off separate from the film door, the gears, the takeup hook, and the electronics. Removing two screws reveals the film plane! Just make a simple ground glass out of an old used pack of film, and you are on your way! I tell you how here: http://www.lofianddiy.com/2016/09/making-your-pack-film-lastfuji-fp100c_80.html . After removing the panel and putting in your ground glass, press bulb on your manual lens and hold the camera upside down. Look down at it like you are focusing a TLR! I find it is easy to find your focus by googling free eye charts on your computer screen.

My first I-1 hack is a primitive one-trick pony, similar to the Polaroid Big Shot. I want to use it to take pictures at family Christmas parties, so I chose the 105 lens which makes it perfect for getting small groups of people. The ideal distance is 3 ½ feet, but a little closer and a little further are still sharp at most apertures. If I want to add a flash, I just screw in a generic grip with a cold shoe. The only problem I encountered thus far, is my old flashes are far too bright for the 650 iso film. Even at f32, my people images were blown out. In the short term, I am just trying to get used to a bounce flash. I found a nice mini slave that may work without bounce. Otherwise, everything works like a charm! There is no vignetting, and the bokeh is pleasing. I also tried it with a plus one diopter and it is perfect for portraiture!

Remember, this is bare bones. Some features I will likely add: I may do a viewfinder, but to make it more fun I will likely just do laser range-finding by converging dots, as that makes shooting easy and quick. I need a weaker flash if I intend to continue using the 600 film, but I also have the option of shooting sx-70 film at 100 iso. I will definitely try to clean up the looks a bit and hide the batteries. I may add a small rheostat to control film ejection speed, as fresh batteries make the film eject quite fast. While that is not a problem with the black and white, it promotes streaking in the color. At some point, I may use a 127mm lens and an adjustable focus as well. If I ever find a small ring flash I may add that to the look, but so far my search has yielded no fruit. 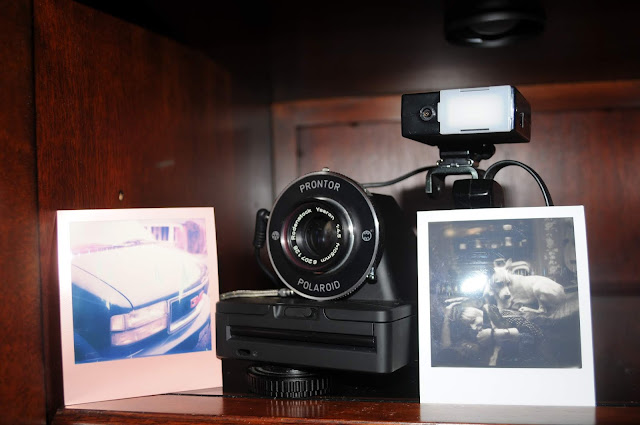 But for now, I feel I have created quite a nice little camera for the holidays by killing an I-1. And yes, I will kill again! 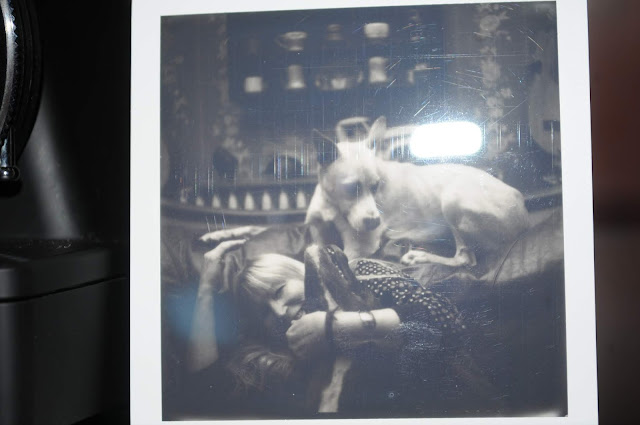