Cigar Box Guitars- The most fun you can have with a few bucks!

Cigar box guitars are a tradition that stretches back to the 1830 when cigars first became available in small wooden boxes. Inspired by the African Bajar, the combination of a box, a stick of wood, and strings made a very affordable instrument for people who had little means at their disposal, such as African Americans, Appalachians, and various American rural populations. They were carried by civil war soldiers, and saw resurgence in popularity during the great depression. Many famous players, from Jimi Hendrix to Bo Diddley played cigar box guitars, and some, like BB King, cut their teeth on cbgs! Their most recent popular revival is going on right now, as a part of the DIY culture, and there are clubs, websites, products, and kits dedicated to the instruments.

I am a big fan of the DIY movement. I make these guitars in an effort to keep the tradition alive, as well as provide new generations access to this instrument. I have taught classes in making these, and have distilled the basic traits down to my own recipe based on sound and simplicity.
There are some great tutorials online on how to make these, so I will just go over the basics: The first and probably most difficult part is to shape the neck. I use a piece of 1x2 red oak(3/4 x1 ½ actual). The reason I use a hardwood is there will be a great deal of tension on the neck when it is strung. I cut away 1/8th inch depth for the head-stock, and ¼ inch for the body. I get my fret pattern from free online fret calculators. I use the standard 24.75 scale length (like a Gibson guitar). For my fretless version, I trace out frets with a wood burner, and add markers with a screw put into the end of the wood burner. It is up to you how round you want the back of the neck, but I leave the fretboard nice and flat so it is easy to play with a slide.
When it comes to the box, just about any box will sound pretty good- even the cardboard ones. The best sound seems to come from the all wooden ones, and they look great! Measure out the end dimension of the neck and cut out the space with a small saw and a utility knife. Any paper on the inside where the neck will be glued has to be removed. Cut the body end of the neck to length, clamp, and glue it. I make my tailpiece from 75lb picture hangers, but I have also used old hinges. Since the neck doubles as a brace on the soundboard, mount the tailpiece to it for strength. Use spade bits or hole saws to cut a few sound holes. Hot glue in grommet rings or drain screens for the classic look.
The rest is very simple. . I use threaded rod cut to length as the bridge and the nut of my guitars. Add tuners (any will do) or make your own from a screw eye with a hole cut through. I choose to string mine with 3,4, and 5 of guitar string and tune it to open g.
Playing an instrument is such a joy. Making a workable and great sounding instrument is fun and easy. Caution: After you make one of these, you may try to tackle other musical instrument DIYs. I highly recommend it! 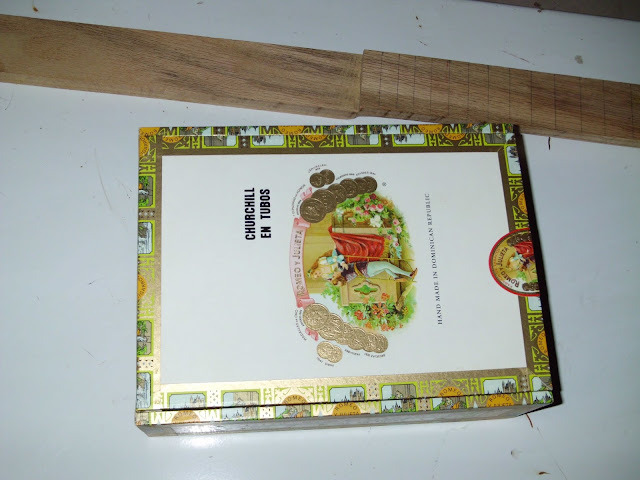 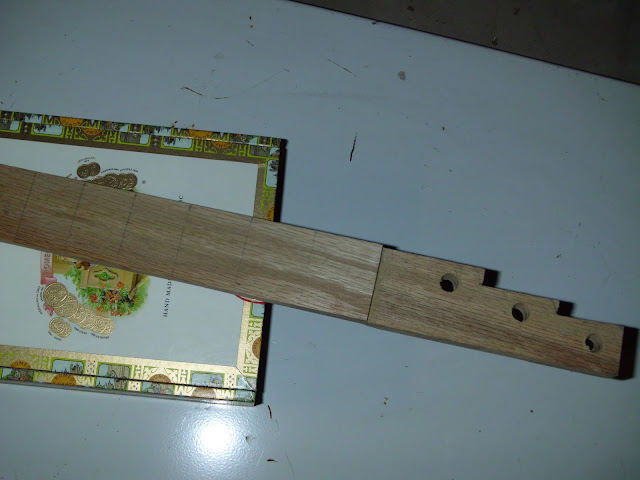 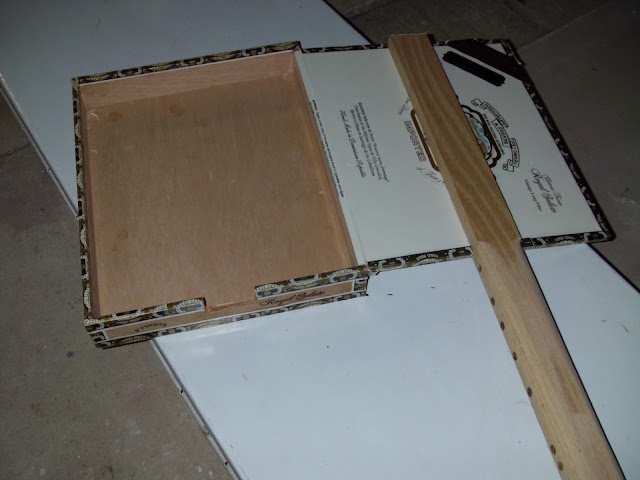 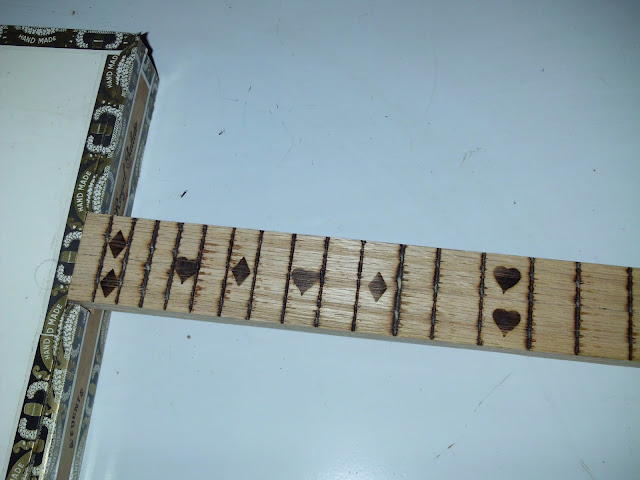 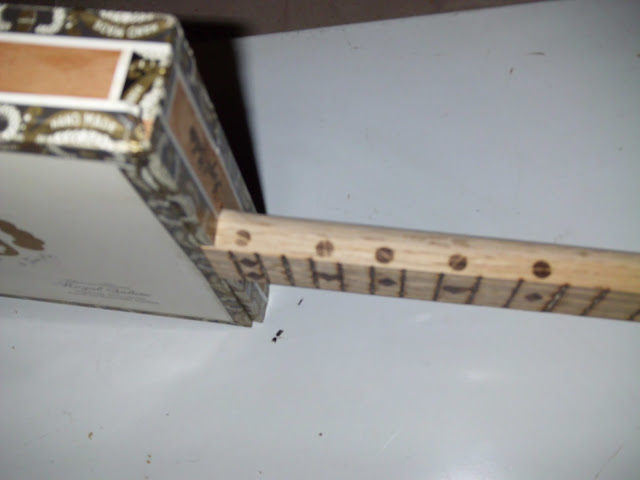 My Polaroid Obsession Part Ten, Instant roll film cameras- where it all began.

It began with an innocent inquiry by a 3 year old girl in 1943. While Doctor Land was snapping pictures on the beach in Santa Fe, his daughter asked “Daddy, why can't I see the picture now?” He pondered that question the rest of the day, and had a workable answer that would drive his company for the next half century.

Though instant Polaroid roll film is one of the few types of instant film you cannot get anymore, the cameras form an essential part of my collection. The 95 was the first fully instant camera they rolled out in 1947. The first pictures came out in sepia tone and were prone to fading. This was solved by immediately painting on a sticky stop goo called the print coater. One would have to wave it back and forth to dry the coater. This is where the famous “shake it like a Polaroid” came from.

Originally the intention was to have other companies manufacture the cameras, but the cameras of the time were fairly inaccurate ( due to easy corrections that could be made in the darkroom). Obviously with instant film no lab based corrections could be made to the image. The cameras had to have very specific shutter times, so Polaroid started to manufacture their own cameras.

Polaroid got a reputation as a consumer point and shoot instant camera company in the eighties, but they were not always regarded that way. From the very beginning, Polaroid had the attention of professional photographers everywhere. Ansel Adams was a lifetime consultant to Dr. Land and a huge fan of Polaroid.

The earliest instant roll film cameras were very heavy- weighing in just above 5lbs! This was due to a tax break on “professional” cameras- the professional determination was based solely on weight! The 95 was a consumer designed product, but it was followed quickly by a string of professional grade products including great fully manual lenses and shutters, the 110,110a, 110b, and 120. These cameras are still highly sought after by Polaroid fans. Today there is a small cottage industry that creates packfilm conversions of these cameras which then sell for around 700 to 1500 dollars.

There were several other versions with this general shape- each refining the product. The last one, the 850 and 900, included the “electric eye” which allowed for the first automation of exposure. One version, the 80 “Highlander” was the first portable Polaroid camera. The J33 and J66 were roll film cameras that started to hint at the design of the later pack film bellows cameras, the Automatics.

My absolute favorite of this line of cameras is my 120. It is a fully manual camera manufactured by Yashica for Polaroid for international markets, and it has an aperture range from f4.7-90. It needed a tiny aperture like 90 to compensate for incredibly fast film speeds(3000). With such high film speeds in black and white, one could take indoor pictures with no need for a flash.

When I think of instant cameras, I am always reminded of Arthur C. Clarke's three laws:

1. When a distinguished but elderly scientist states that something is possible, he is almost certainly right. When he states that something is impossible, he is very probably wrong.
2. The only way of discovering the limits of the possible is to venture a little way past them into the impossible.
3. Any sufficiently advanced technology is indistinguishable from magic.


This followed by the famous quote of Dr. Land himself: Don't undertake a project unless it is manifestly important and nearly impossible. 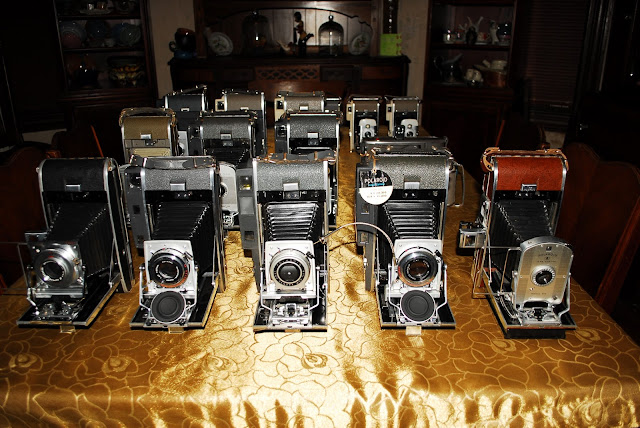 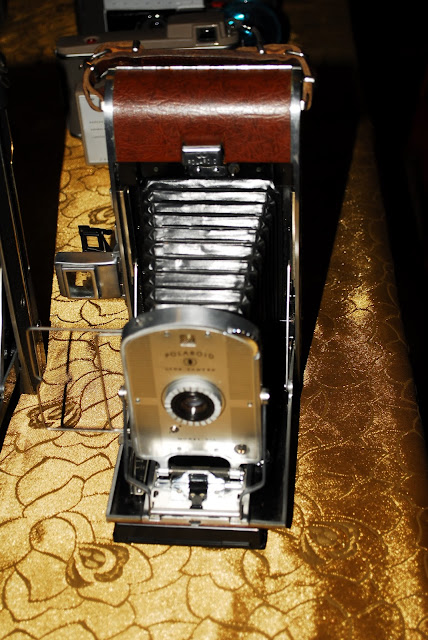 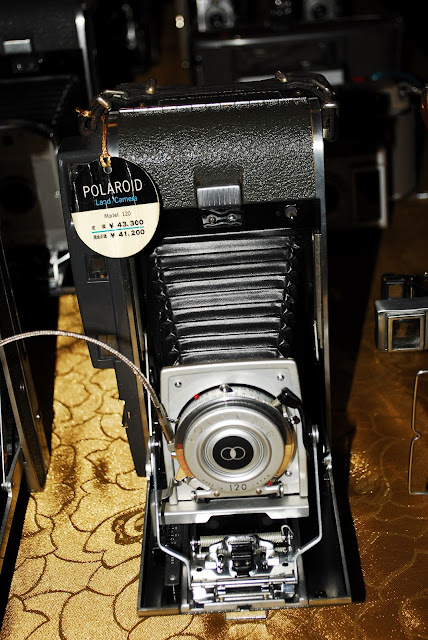 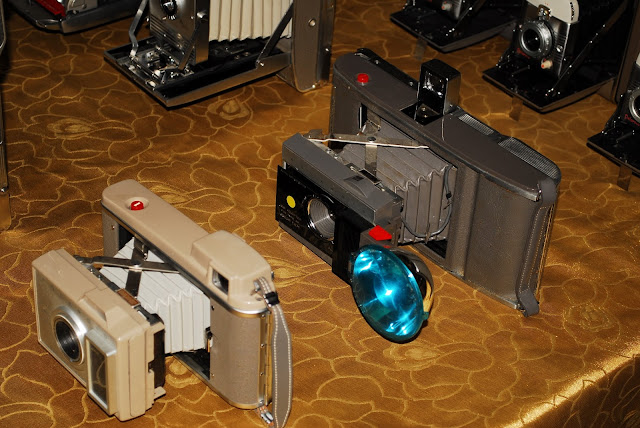 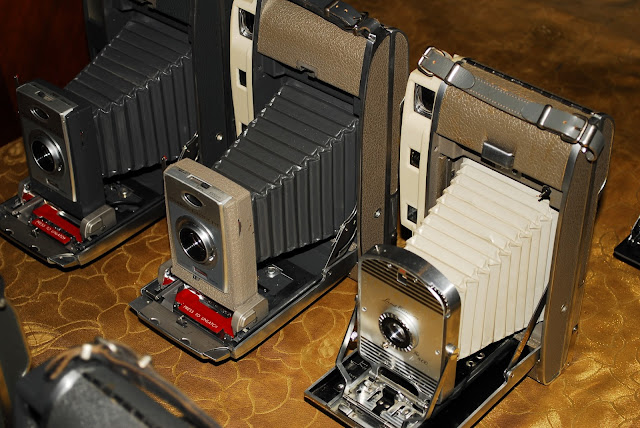 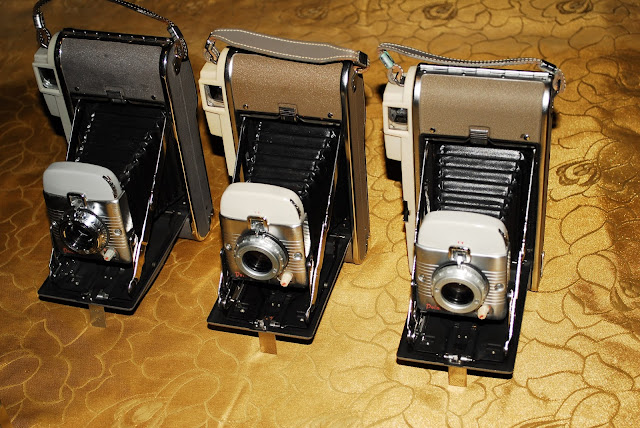 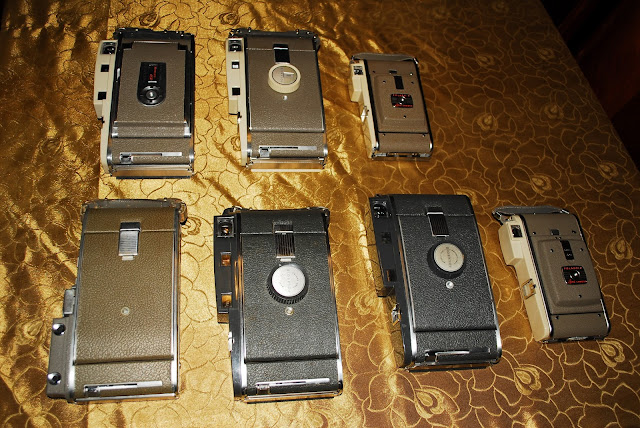 My Polaroid Obsession Part Nine, Geeking out on special use cameras.

Dr Land and Polaroid came up with a million ways to use instant photography, much of it in professional fields. From dentistry and forensics to passport photos, the ubiquity of instant photography ideas were endless. Not only were cameras constructed for very specific applications, but films were made with built in grids, heightened uv sensitivity, and never before achieved film speeds (iso 20,000).
My collection mostly falls into three categories: dental macro cameras, oscilloscope cameras, and passport cameras. I also have a couple stand alone oddballs like the microscope camera. The film ranges from traditional pack-film to specialized Spectra film. Two are full slr cameras. Others have preview windows built into the hood, and some use two lasers that form a cross on the subject when you are in focal distance!
I am sure there are millions of these special use cameras out there. If you get the chance- snag one. They are quite fun to shoot, and the looks you get are worth the low dollars they typically command! 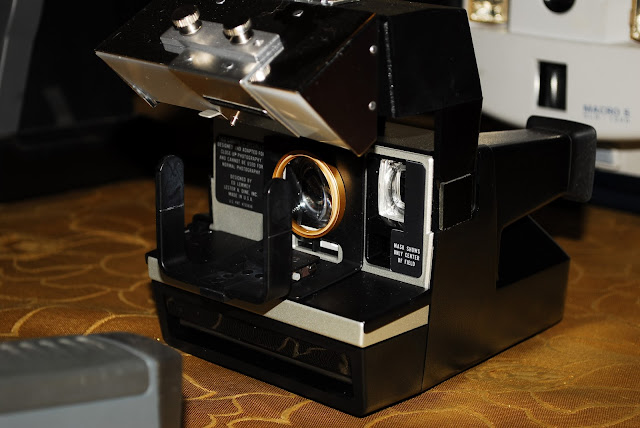 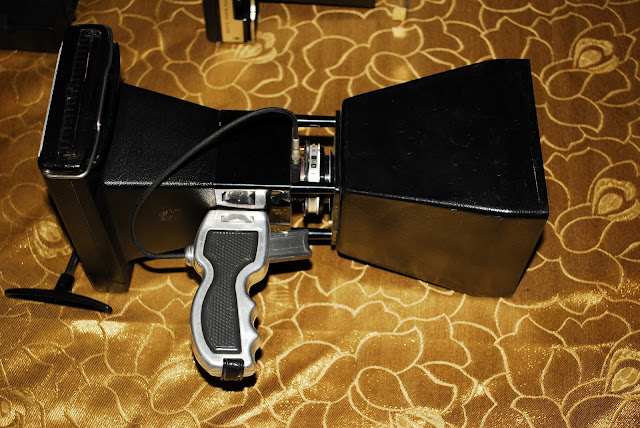 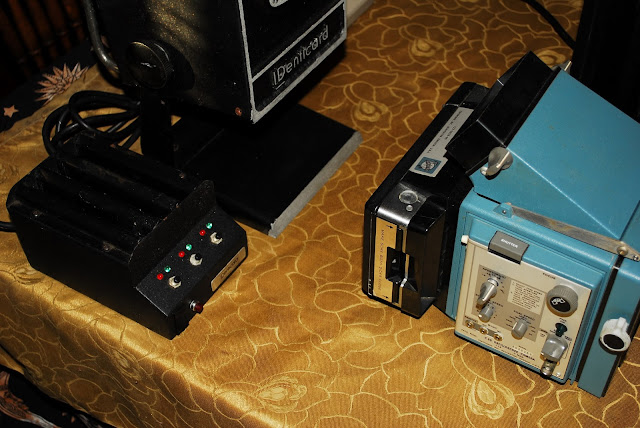 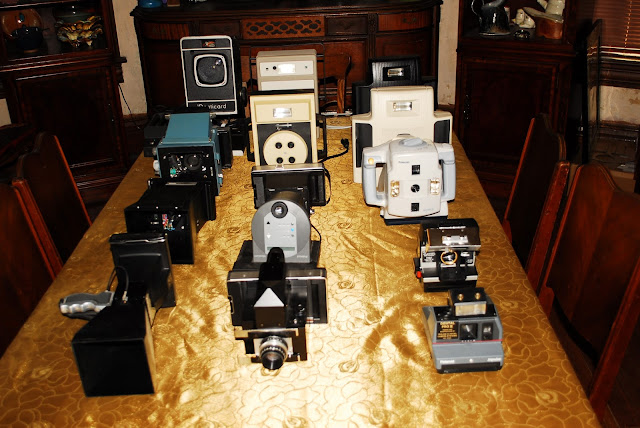