Inconspicuous consumption, or building a banjo

Have you ever just wanted something? No logic involved? It is a lot easier to get something you want when you have a string of excuses for why you need it- ways to convince yourself you have to have it. When it is just a desire not connected to anything more than a passing feeling, it is much harder to convince yourself to get it- much less the rest of the world.
Yet, these ridiculous spontaneous purchases are what our society is made of! Being a bit of a tightwad, what I often do is find a way to A] Make the purchase cash neutral (an example would be buying something in a lot and selling off the others to break even or profit), B] Trade for the item, or C] Make it myself!

In my case, this thing that I wanted was a banjo. I saw them in music stores and they were so bright and interesting. I could say the attraction was bluegrass, the claw-hammer style, or old-time music, but that would be giving me too much credit. My connection to the banjo is more like Kermit the Frog, Steve Martin, and Deliverance. In other words, I had no right to the instrument!
Even cheap banjos are usually expensive, so I set about making one out of junk I have in the basement. The foundation is a drum. Unfortunately I had to choose a drum that I had on hand, so my banjo body is quite large. I used a snare drum when I should have used a small tom. Banjo heads are usually 11 inches or so, and mine is 14 inches. That combined with the trash can lid for the resonator back, and I have a monster banjo.
Why trash parts? That leads me to the origin and the history of the banjo. The original banjo was a banjar and comes out of Africa. The banjo as we know it was a slave's instrument and it was home made. It wasn't until minstrel shows that white Americans started to use the instrument, and at first it was in comedy wearing blackface. When American whites began to love the banjo, there was a great effort by instrument makers to whitewash the instrument. That is why it looks so decorative today. I wanted my instrument to speak of the earlier connection to folk art and craft. 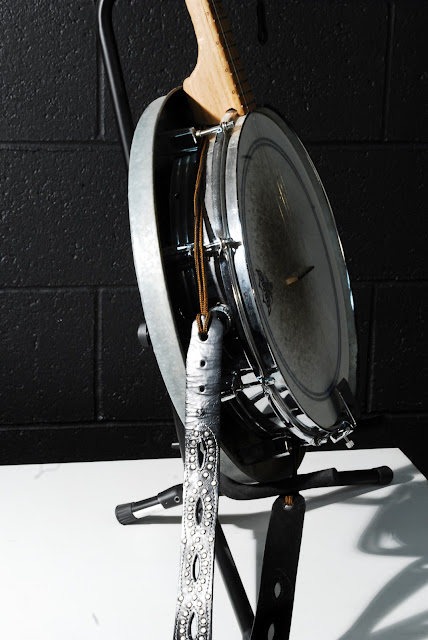 Making one was rather simple but time consuming. Take the hardware off of a snare drum until you are just left with the ring. Cut the snare drum in half so you end up with two rings. Look at lots of sites with banjos and combine that with using a program that calculates the fret locations. Shape a neck by cutting a block of wood in profile and sanding it until you are close. Mount frets, mount hardware and mount the neck. I chose to mount the neck by drilling a hole in the butt end of the neck and mounting one of those screw in nuts, then drilling a hole through the body and running a threaded rod through. It took me quite a while to shape the butt end with a jig saw and sandpaper to get it tolerable, and even more time to get the neck at the right angle when mounting. Now just add the trash can lid and you can string it. The strap is made of an old belt and boot strings. The bridge and tailpiece were the only things I bought and I got them from China via ebay.
I had a friend who can play banjo test it, and he was impressed. Once I made it I set it on a stand out of the way so I could grab it when the feeling struck. It is a very good thing I did not buy a banjo! I am just starting to get that feeling now, years later!
It is very empowering to be able to work with your hands, stringing together a lifetime of craft and art to make whatever comes to mind. Not all projects succeed, but I feel pretty good about this one. Now it is time to play!
Posted by Aaron at 8:19 AM