Somewhere along the line the transition occurred- maybe the early nineties. Entertainment centers were out, and a reinvented version of your grandmother’s armoire was in. Designed to hold a tube T.V. of great size and weight, the backs of these entertainment armoires had holes cut in them so the tube could stick out without making the furniture too large. A convenient shelf was included to slide your vcr, dvd, or laser disc player in. Below those shelves were often either drawers or shelves to hold your media.
Soon after there were entertainment armoires, there were computer armoires. Intended as a stand alone home office, they included slots for media, shelves for printers, a compartment for the tower, a keyboard tray, file drawers, a desk top, and more.
And just like that- they were obsolete. Tube TVs were replaced by wide flat screens that no longer fit in the space provided. These tvs can be mounted to the wall, and no longer needed a piece of furniture that hid their ugliness. Vcrs went the way of the dodo, and dvds are fast on their way out the door as well. Most computers no longer have towers, and many are made so portable that they don’t need a dedicated storage space. Printers are often wireless, so they don’t need to be physically tethered to a computer. I wonder if there has ever been a piece of substantial furniture with a shorter usable life.
Craigslist was full of them- armoires that once fetched 1500 to 3000 dollars were being sold for next to nothing. Many were good pieces of furniture made with quality woods. Since they were being dumped en mass, that hurt their value even more than the perceived obsolescence! Not only were the average homeowners looking to get rid of their dated furniture, but the hotels and motels nationwide were purging themselves of these pieces. Some of these contained recessed lighting and built in power strips. The hardware alone was often worth more than they were asking for the entire unit!
There was a downside for an interested buyer. Armoires have always been fairly large and heavy- and these were no exceptions. Built in conveniences like lazy-susans, hide away doors, shelves galore, and many other accoutrements , added to the weight substantially. The buyer would not only have to find transport, but also to find a way to carry this weight into the house to the appropriate floor. I found this to be a challenge, as I broke my ankle moving one into the house! 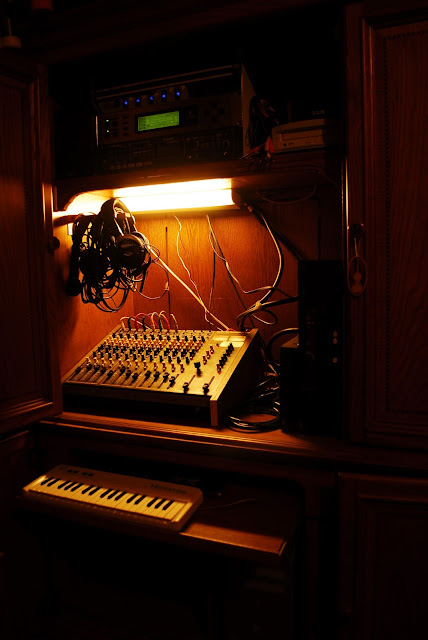 Armoires can be re-purposed for a lot of things, from simple to sophisticated. With very little effort and some creativity- the sky is the limit! I chose to pack one room of my house with armoires like prior generations did with bookshelves to create a library. Some basic purposes for my armoires: A closet for guitar storage, a place for my Yamaha keyboards, a place for musical miscellany, a home studio for recording music, painting storage, a place for Ann’s collections, a craft armoire full of craft supplies, and a home office.
I have found that just about any hobby or interest can fit in these nicely- especially the computer armoires, as they have a nice desk top that pulls out. You can easily build shelves in them, as well as store all sizes of plastic totes. Aside from great storage, a benefit is how easily you can close the door to your chaos when the guests arrive.
If you really want to blow some minds, store clothes in them! 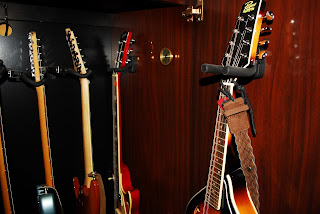 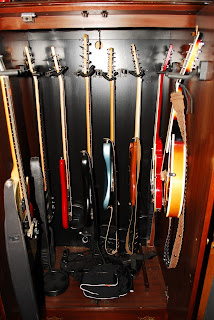 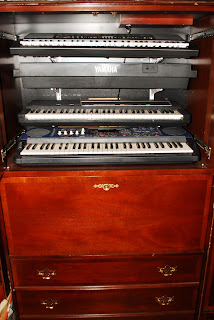