Reflective Objects: My Collection, or Hoarding as Art! 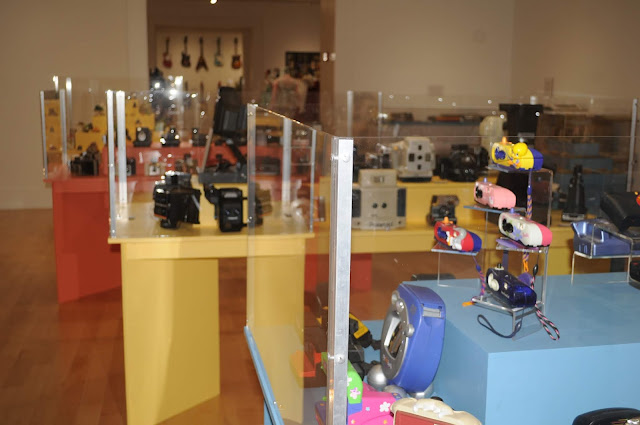 This fall I have been fortunate to be included in a show at the Kennedy Art Center in Athens, Ohio. The show, Reflective Objects: Collectors and Their Collections, was an opportunity for me to showcase my obsession for Polaroid cameras! 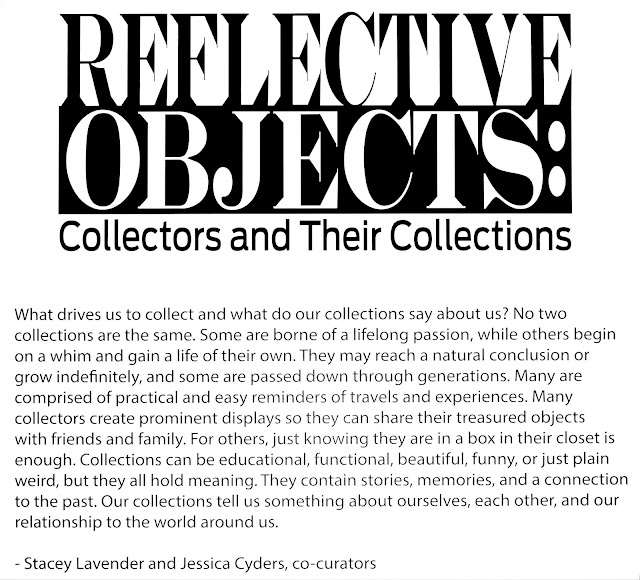 The museum preparator and everything guy, Jeff Carr, made all of the pedestals and cases you see, as well as dress forms and any other thing to support the collections. He did an amazing job and added some much-needed color to my early Polaroid collection!

I wrote a bit of information to go along with the show, and here it is:


When I think of instant cameras, I am always reminded of Arthur C. Clarke's three laws: 1. When a distinguished but elderly scientist states that something is possible, he is almost certainly right. When he states that something is impossible, he is very probably wrong. 2. The only way of discovering the limits of the possible is to venture a little way past them into the impossible. 3. Any sufficiently advanced technology is indistinguishable from magic.

This followed by the famous quote of Dr. Land himself: Don't undertake a project unless it is manifestly important and nearly impossible.

My camera collection can be separated into roughly three categories: Early land cameras, scientific and professional cameras, and the later polaroid cameras: pop culture/ cameras as lifestyle statements. I write extensively about my camera collection in my blog: LoFiandDIY.com.I have drawn from a blog entry per category as a way of explaining my sickness.

It began with an innocent inquiry by a 3-year-old girl in 1943. While Doctor Land was snapping pictures on the beach in Santa Fe, his daughter asked: “Daddy, why can't I see the picture now?” He pondered that question the rest of the day and had a workable answer that would drive his company for the next half-century. 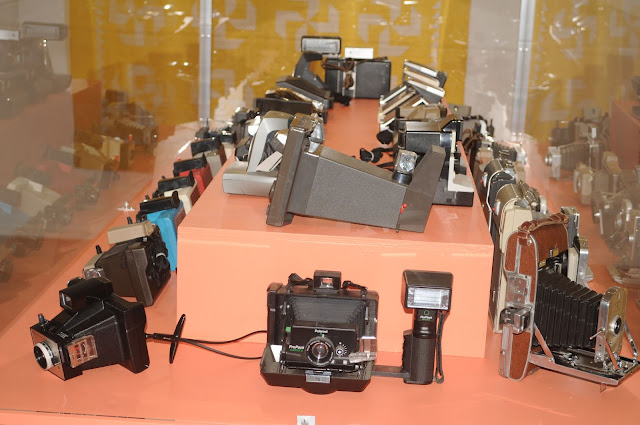 Though instant Polaroid roll film is one of the few types of instant film you cannot get any more, the cameras form an essential part of my collection. The 95 was the first fully instant camera they rolled out in 1947. The first pictures came out in a sepia tone and were prone to fading. This was solved by immediately painting on a sticky stop goo called the print coater. One would have to wave it back and forth to dry the coater. This is where the famous “shake it like a Polaroid” came from. 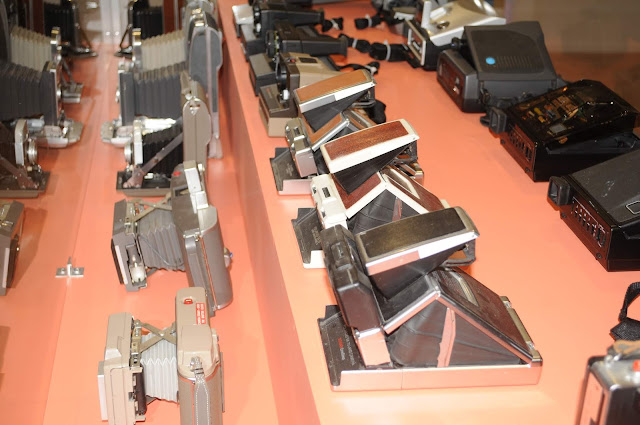 Originally the intention was to have other companies manufacture the cameras, but the cameras of the time were fairly inaccurate ( due to easy corrections that could be made in the darkroom). Obviously, with instant film no lab-based corrections could be made to the image. The cameras had to have very specific shutter times, so Polaroid started to manufacture their own cameras. 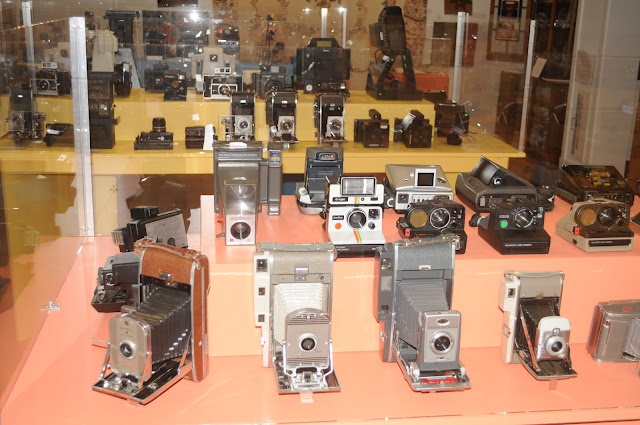 Polaroid got a reputation as a consumer point and shoot instant camera company in the eighties, but they were not always regarded that way. From the very beginning, Polaroid had the attention of professional photographers everywhere. Ansel Adams was a lifetime consultant to Dr. Land and a huge fan of Polaroid. 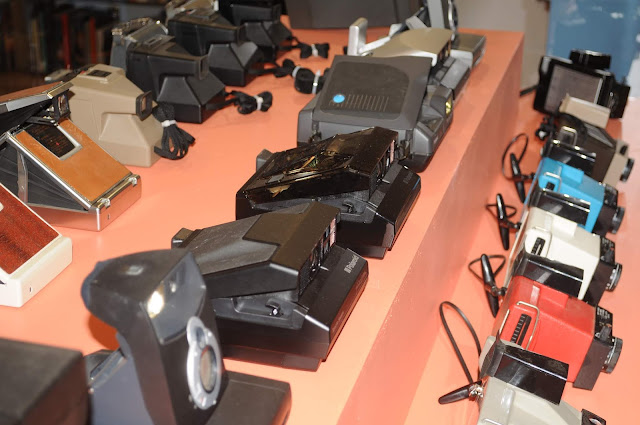 The earliest instant roll film cameras were very heavy- weighing in just above 5lbs! This was due to a tax break on “professional” cameras- the professional determination was based solely on weight! The 95 was a consumer designed product, but it was followed quickly by a string of professional-grade products including great fully manual lenses and shutters, the 110,110a, 110b, and 120. These cameras are still highly sought after by Polaroid fans. Today there is a small cottage industry that creates pack-film conversions of these cameras which then sell for around 700 to 1500 dollars. 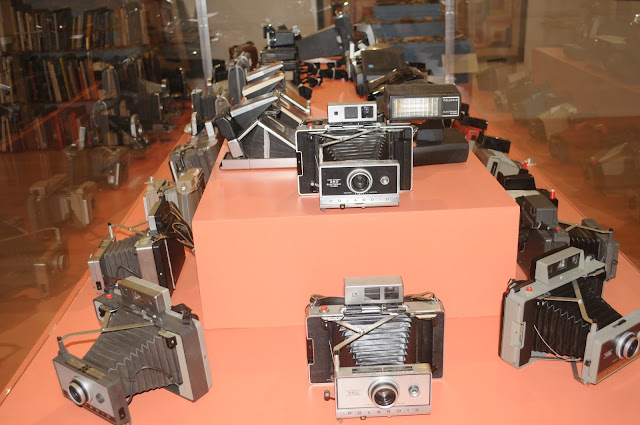 Dr Land and Polaroid came up with a million ways to use instant photography, much of it in professional fields. From dentistry and forensics to passport photos, the ubiquity of instant photography ideas were endless. Not only were cameras constructed for very specific applications, but films were made with built-in grids, heightened UV sensitivity, and never before achieved film speeds (iso 20,000). 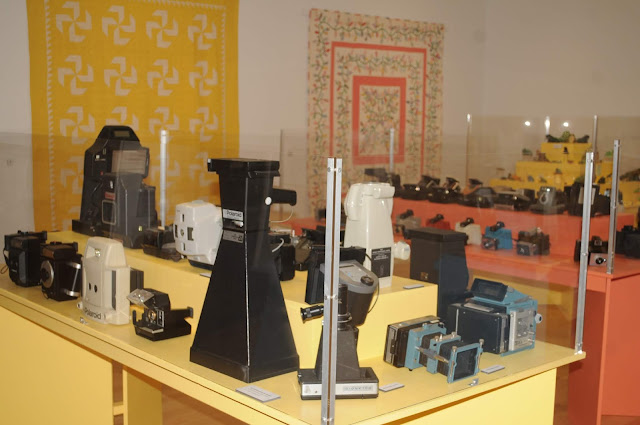 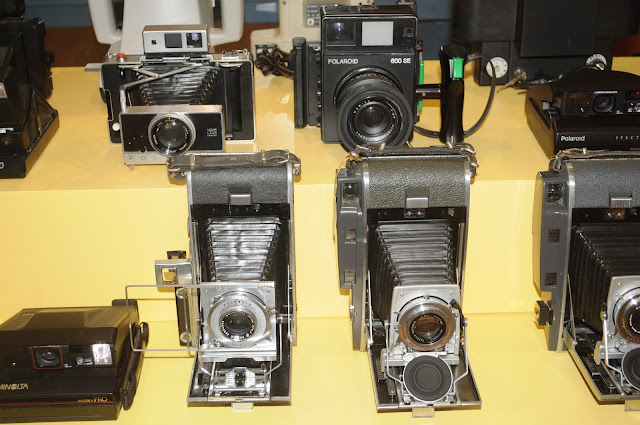 This part of my collection mostly falls into three categories: dental macro cameras, oscilloscope cameras, and passport cameras. I also have a couple stand-alone oddballs like the microscope camera. The film ranges from traditional pack-film to specialized Spectra film. Two are full SLR cameras. Others have preview windows built into the hood, and some use two lasers that form a cross on the subject when you are in the focal distance!

I am sure there are millions of these special-use cameras out there. If you get the chance- snag one. They are quite fun to shoot, and the looks you get are worth the low dollars they typically command! 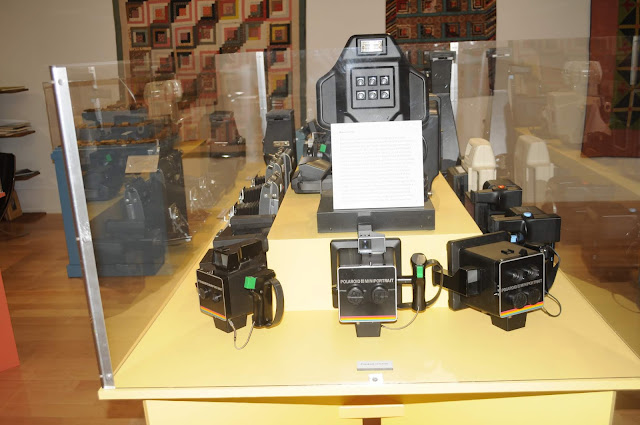 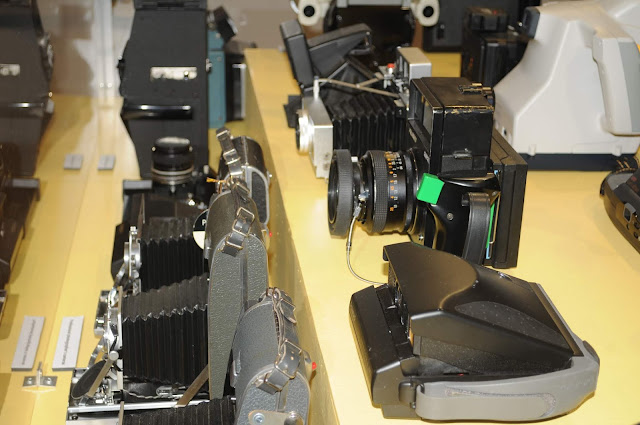 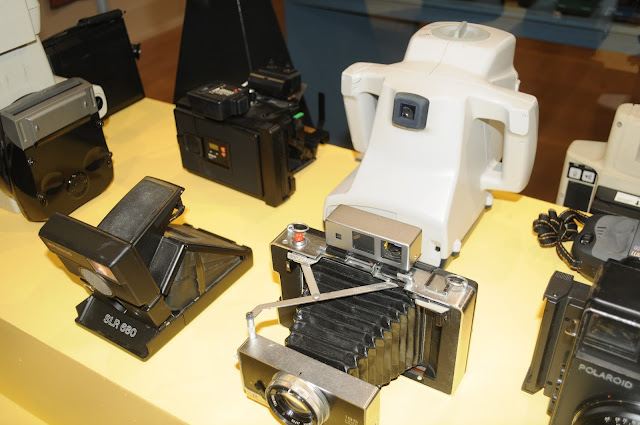 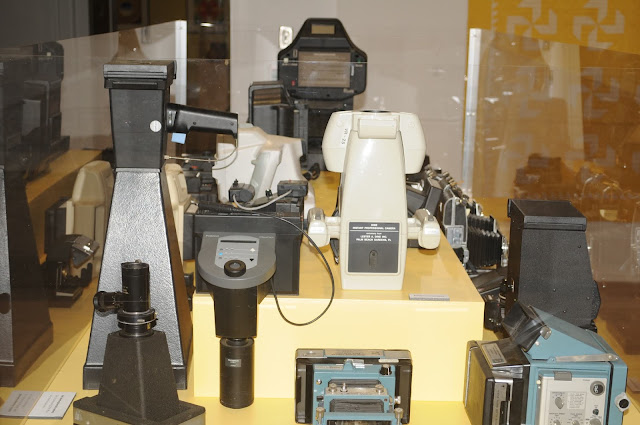 When I started collecting the I-Zone cameras, I had to learn to accept my addiction. Hello, I am Aaron, and I am a camera collector. The reason for my acceptance is that these cameras don't take any kind of film that is available. Even the expired film I have found has not worked in them. They are officially for legacy only. They also may exist as a cautionary tale! 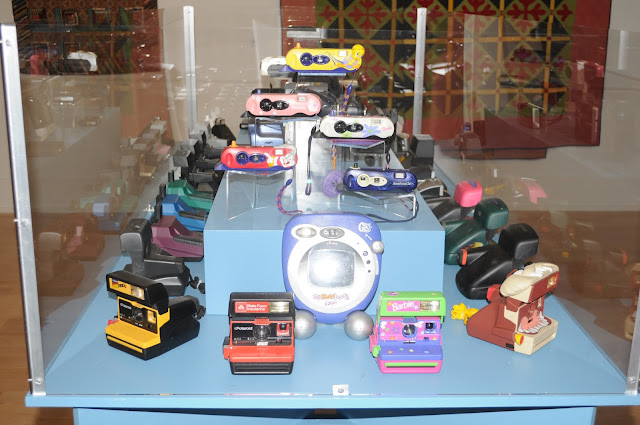 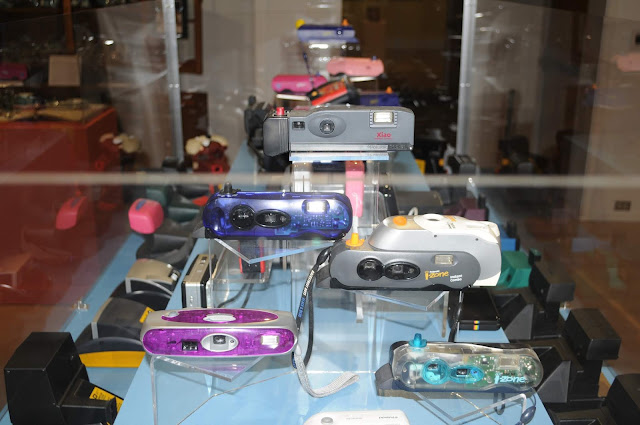 Dr. Edwin Land, the inventor of Polaroid, was very much against making cheap, mass consumer products. His idea was to allow everyone to have access to cameras and instant development, but never at the cost of creating a bubble gum and sugar cereal type product, and this is exactly what the I-Zones were. They were marketed to children and tweens, and they were a powerful short term market. They made them with bright colors, simple use, sticker backing, and convenient size. They were an early version of the facebook post. You snapped them, shared them, stuck them on your wall, and wrote on them. Dr. Land would have liked that part of the product, as he wanted shooting instant film to be an event. What he wouldn't have approved of is chasing the latest trend- the flash in the pan. He was about long term innovation.

Business wise, they were the hare, when Dr. Land preferred the tortoise. Not to say that he was slow, but he was steady. Dr. Land actually has the second most patents secured ever, with only Thomas Edison as his better. This “hare” shareholder and bottom-line mentality was eventually the death of Polaroid. 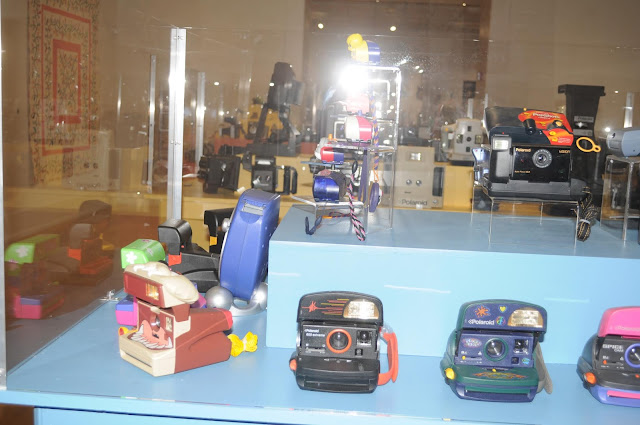 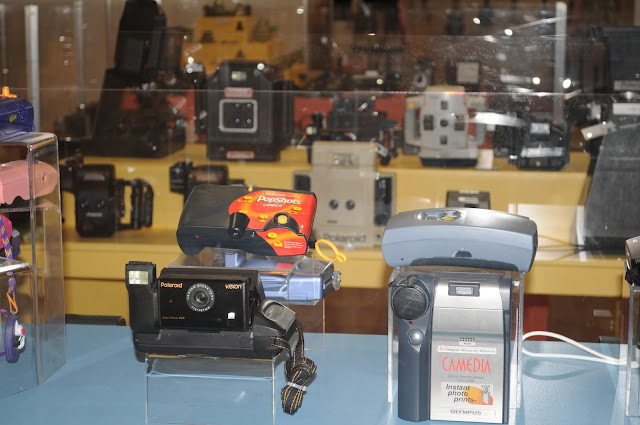 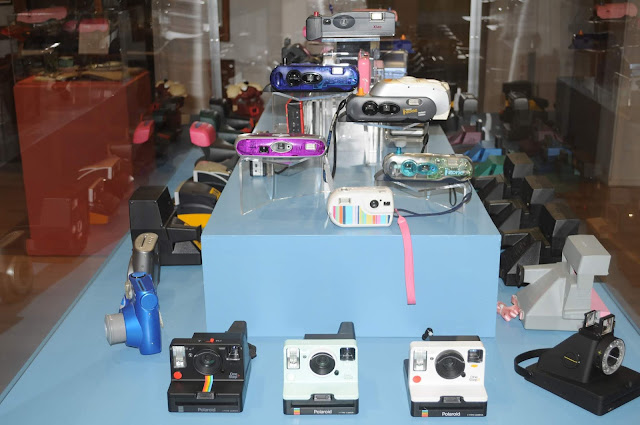 So here is what collecting has become to me. It is a legacy preserving action, the parts forming the whole as a unique art piece. The collection is about content- not just about surface. There is a deeper read. Obsolescence captures the movement of time, and often the color, design, shape, and purpose of the object capture the spirit of the era. Oh, yeah- it is fun, too.
Posted by Aaron at 9:52 AM