Late to the party, or Polaroid 110a conversion to packfilm in the era of packfilm rarity. 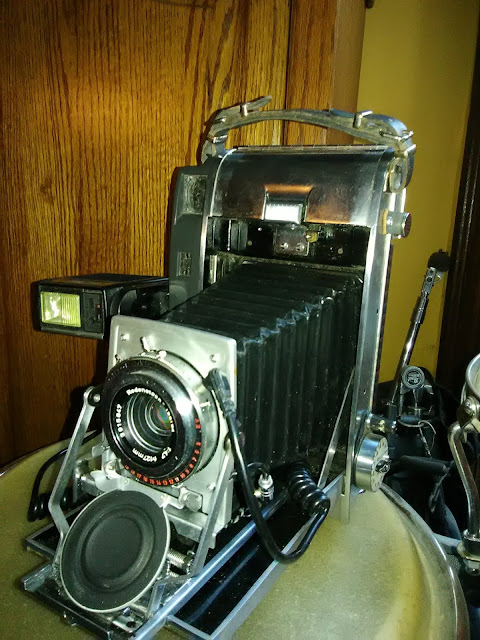 I don't know what it is about this digital, post- analog age that inspires me to rebel, but I find myself constantly looking for ways to resuscitate obsolete analog stuff! If the lady at the counter of the antique, thrift store, or flea market says they stopped making film for it or you can't get the batteries, I say “challenge accepted!”. To which I am sure they say “ what an epic waste of time!”.
This particular project is not in any way original- there are hundreds if not thousands of conversions done on these old cameras. The camera is a Polaroid 110A Pathfinder, and the conversion is from Polaroid roll film(which is obsolete) to packfilm(which was invented by Polaroid and was made by Fuji until 2016 with their film expiring in 2018). One of the reasons this type of conversion is so popular is the nice fully- manual lenses that Polaroid put on their 110 series of cameras. I started this project two years ago, prior to the announcement by Fuji of their discontinuation of packfilm.
The reason for the delay on this project was not said discontinuation, but rather that it was an unimportant side- project in a house full of side- projects! I would go down into the basement, giving 5 minutes here, 5 minutes there, with this wonderful monstrosity slowly taking form!
One departure I made from the other conversions I have seen is purely aesthetic. I chose a chrome packfilm back taken off of lab equipment, and paired the chrome with a naked camera. When I stripped the bad old leather off of the camera, I discovered that it looked really cool without the skin. This advanced a decidedly steampunk aesthetic, like an earlier conversion I did from an automatic 100 to a manual 100.
This steampunk look also allows me to connect anything and everything to the camera in a haphazard way- more stuff just advances the look! I have attached a modified 110 tripod stand(modified for film pull clearance), a flash, a development timer into the side tripod socket, and an ev meter into the accessory shoe. The only changes I plan to do are possibly a bracket for a more period appropriate heiland or graflex flash( I love shooting flash bulbs), and a cleaner pc cable.
And finally- how does it shoot? Very well- I have my simple packfilm “ground glass” (there is another blog entry on this site on how to make one) for dialing in specialized studio shots, but I can pretty much depend on the rangefinder for day to day shooting. Like most older cameras, you have to adjust for parallax for shots that are closer to the lens.
One cool feature this camera has is you can dial in your speed and aperture based on exposure, lock it in, and now have the two tethered so you can make your shot based on either! It is kind of like having a speed/aperture priority function on a manual camera. Along those lines, I set this camera up with a light meter with Polaroid EV settings- it is quite easy to use once you understand it.

On a side-note: Packfilm may just come back from the ashes. The leader, spirit, and founder behind the Impossible Project(Which rescued and resuscitated Polaroid's integral film line) is gathering a team of experts to re- build packfilm!