Come to the dark slide- together we will rule the galaxy! Or cheap and easy DIY dark slide for any camera.

I get all of my stuff second hand. I am a second level consumer, and proud of it. I will scour bargain bins and buy boxes of junk hoping for diamonds. Many of my cameras and equipment have been patched together with found parts. I don't believe in trickle down economics but I strongly believe in trickle down commodities. I own things that were once worth a lot- and if I get in my time machine, then I am materially wealthy!

Sometimes you cannot wait to luck into that missing part. That is when you fabricate. The easiest fabrication I have done was making my own dark slides. If you don't know what a dark slide is, Wikipedia describes it as: a wooden plate or metal plate that covers the sensitized emulsion side of a photographic plate. One 20th century use for a dark slide is to remove a back from a camera without exposing the film within. I have two camera backs without dark slides, both Polaroid 100 type backs- one for the 600SE and one for my speed Graphic.
One can make many replacement dark slides for pennies on the dollar. All you need is a black sharpie, scissors, aluminum flashing, and a ruler. It is also helpful but not necessary to have a burnisher. I found that fairly thin flashing works best-it cuts cleanly with scissors and fits best into the slot without the risk of distorting or damaging the slot that you feed it into. Having said this- the thinner metal is bendable and not hardened, so you have to feed it in carefully until you are used to it. Any thing thicker will have to be cut with tin snips, and my experiment with that was not as successful. I spent a lot of time cleaning up the edges, and I did not like the resistance I felt when pressing it into the slot. If you use tin snips and thicker metal you will have to burnish the edges with a file or burnisher.
First measure the width of the slot and remove about a 16th from the measurement. Then measure the length of the entire body of the cassette. Cut a rectangle using those measurements, but add 2 inches to the length. Try feeding it into the cassette. If the slot is too narrow, you may have to remove a bit more from the side. There is usually at least ¼ wiggle room in there, so don't worry! Hopefully when you feed it fully in you see about an inch or more still sticking out. Don't worry if the metal did not fully feed into the cassette. Pull the metal sheet out and cut a gentle concavity to the feeding side with your scissors. Look at the pictures for the concavity. This is so the end does not just butt into the inside of the cassette, but rather feed into it.
Now you have the dark slide and everything else is just finishing. If you have a burnisher, burnish the edges. If not, just make sure there are no jagged edges. Put the dark slide fully in and measure the part sticking out. Make a mark at an inch and an inch and a half. Trim off the rest. Fold a tab at the 1 Leave enough sticking out of the cassette inch mark so you have one inch sticking out.
You can leave your dark slide like this and call it done, or improve on it. If the first one didn't work perfectly- just trace and do it again! It is cheap and easy. As a final touch I like to hit mine with a wide sharpie to blacken it. I would not recommend painting, as it increases resistance and could stick.
There- the easiest project you have ever done. You have been drawn to the dark slide. 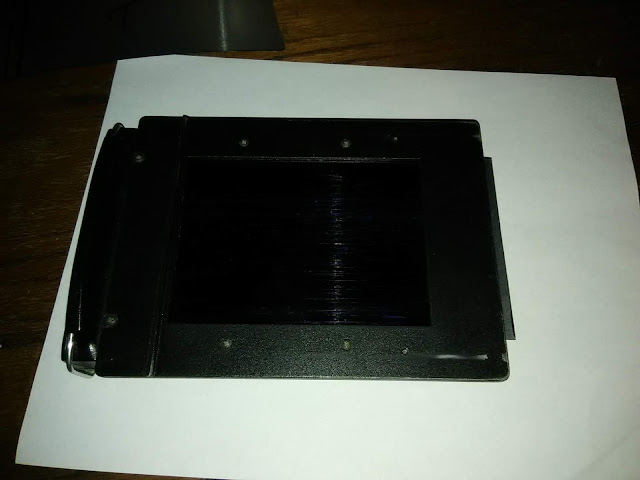 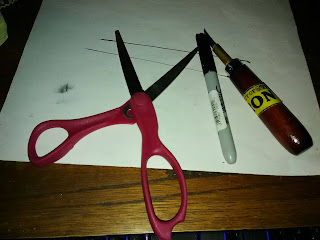 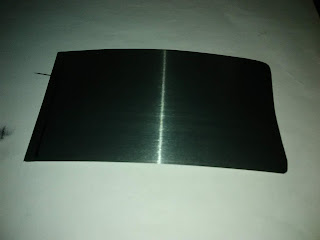 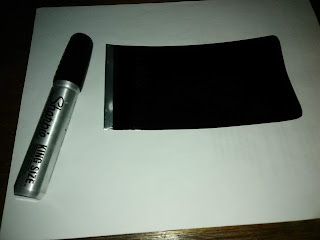 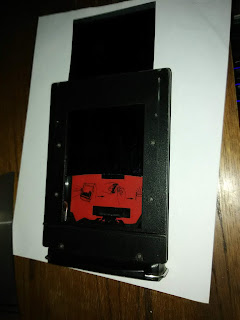