My Polaroid Obsession Part Twelve, Non Polaroid instants: Imitation may be the highest form of flattery, but it will get you sued.

My acquisition of non-Polaroid instants has been accidental and secondary. I never really intended to get a collection of these, but I am glad I have. They provide a strong counterpoint to Polaroid and help further tell the Polaroid story.
Since Dr. Land invented instant photography, and held more patents than anyone in the world( excepting Thomas Edison) all instant photography attempts outside of Polaroid were on shaky ground legally.
The examples I have of non-Polaroid cameras are the Berkeys and the Kodaks, with the contemporary addition of Lomographic Society’s Lomo Instant, Fuji Mini and Fuji Wide, Fuji Mr. Handy, and holgaroid. Berkey’s cameras were obviously copies of Polaroid, and when threatened with a lawsuit over their sx-70 copy , they discontinued production.
While Kodak instant cameras definitely looked different (they were twice the size and really ugly) they used stolen technology from Polaroid, and were sued for patent infringement. To this day, this was the single biggest corporate lawsuit. Kodak was found guilty, and paid a major settlement. They also had to stop all production of the cameras and the film, and initiated a major recall and refund program. I find Kodak’s instant cameras ugly in a funky way, so I snagged them here and there for a couple of bucks.
These cameras highlight the unique challenge instant cameras pose. To this day, I hear photography equipment reviews lambasting instant cameras for traits that are impossible to avoid for this medium. Often they will comment on the size of the camera, faulting the companies for the bulky shape. Kodak’s cameras were huge because, like Polaroid cameras, they contained an entire darkroom! Doctor Land’s SX-70, the sleekest and sexiest SLR ever, was a miracle of design and engineering he had been working on his entire life. It was the exception , not the rule.
Another challenge was getting a large format focal length out of a camera that takes up as little space as possible. Polaroid used mirrors to achieve this, and Kodak didn’t for most of theirs. This also explains the rather large size.
Going from camera to print meant that the hardware had to perform much more consistently than regular film cameras, as there was no darkroom post processing for over and under exposure.
My experience with this small collection taught me something else about Polaroid. Their quality control was excellent. I have worked on pretty much every Polaroid camera there is, and it is relatively easy to get them to work again, even if they are 50 years old or older. The same can not be said about the Kodaks and Berkeys. About ninety percent of the Kodaks I have are non- functioning. More than ninety percent of Polaroids I get are functioning. The Berkey Sx-70s all require attention, though their packfilm varieties are stout and full featured compared to Polaroid's plastic packfilm cameras.
Fuji, though inextricably intertwined with the history of both Polaroid and Kodak instants, has come into its own in the U.S. since the demise of Polaroid. Their quality control easily rivaled Polaroid, and their film can even be said to exceed Polaroid in some categories. This may seem a bit of a miracle since we only see Fuji instants as a recent thing, but their history with instant stretches back quite a while. In the 1980s they made a Fotorama series of cameras that took from the camera design and film design of the Kodak line. Polaroid agreed to allow Fuji only to maintain the foreign markets in exchange for access to Fuji's R&D on magnetic tapes. Later, in the 90s, Fuji introduced the Cheki and the Mio, which are what we think of as Instax Mini cameras. The Mio was branded as a Polaroid and included in their line.
Fuji also made some amazing peel apart film starting in 1984, with no issues of patent infringement because by then Polaroid's patents on packfilm had expired.
I have several Fuji Wide and Mini cameras. Since the market is currently flooded with these, it was not hard to acquire them cheaply. Though they are fun at parties, they are significantly more fragile than Polaroids were. My dog's whipping tail knocked my Wide off a table and it crashed into many pieces from a 32 inch fall!
None of my non -Polaroid instants are what I would call professional grade- which is disappointing, because Fuji Instax film is a great integral film. The closest to a professional , creative tool is my Lomography Instant which offers some extra features like add on lenses, bulb, and multiple exposure. It shoots Instax Mini. New to the instant market, the Lomography Instant has low build quality. I have hopes for their new instant offerings.
The Holgaroid is just that- a cheap chinese Holga with a Polaroid back- gotta love it for fun instant shots with the character of a cheap plastic lens camera!
OK, so I am supposed to be collecting Polaroids! What happened? Instant photography is an addiction, and apparently Polaroid cameras are a gateway drug. My Polaroid collection has not only re-invigorated my interest in photography after a ho-hum relationship with digital, but it is directly responsible for my new darkroom experiments! I blame my latest acquisition, a 350 pound copy camera, squarely on my drug of choice. 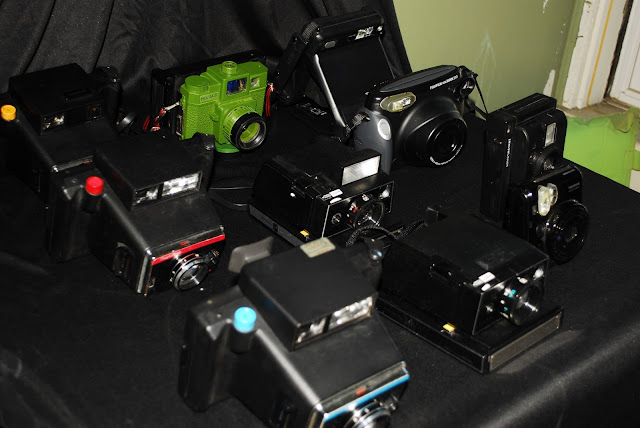 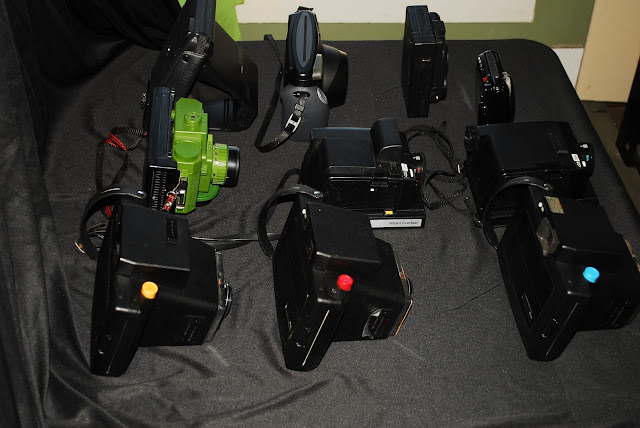