MUP and Goose get an update, or shooting Instax Mini and wide with your Polaroid 600SE and Mamiya Universal Press!


Up until now, I have not featured any of my products in my blog entries. Since I am starting to create things that cannot be found any other way, I decided to change that. I will still be using this platform to talk about my smaller projects while rolling in some exciting micro-manufactory items. Anyone who knows me knows that I place a great deal of value on the one-off, the handcrafted. As a sculptor and a painter, I still get a thrill seeing the hand of the artist molded into the very essence of a piece. As a wheel throwing ceramicist, however, I understand directly the roll even rudimentary technology can play in making.

Collecting, rehabilitating, and even selling some instant cameras have been a source of joy for me since I got my first Polaroid camera in a junk bin five years ago. I have since branched out to creating parts for cameras, many with a 3-d printer.
This entry is about two of them. Back in 2016, I did a blog entry where I put Instax Mini instant film into the film carrier of a 2x3 Graflex Speed Graphic camera. You can find the link here: http://www.lofianddiy.com/2016/09/its-aliiive-orspeed-graphics-instax-mini.html . You can refer to some specifics on how that is done by reading that blog entry. Today I would like to introduce some new products I have been 3D printing and assembling and test them out with the Instax Mini and Wide film!
I am currently making cut film backs for the Mamiya Universal Press and Polaroid 600SE cameras. If you follow me on my blog you will see that I have lots of love for the famous/ ugly-beautiful Goose(600se). This love has extended to a growing collection of the extremely versatile and wonderful Mamiya Press line. I am now making 4x5 and 2x3 Mamiya Universal Press and Polaroid 600SE adapters that allow you to use your Graflex style 2x3 and 4x5 cut film holders. These holders just lock onto the back of your camera like any other adapters, with the film plane already dialed in at the exact distance. I currently sell these adapters here: https://www.ebay.com/str/appalachianfleamarket .
The steps are, basically, the same as I wrote about in my earlier blog, but there are some things I have since learned which make your life easier. When using the Instax Mini film, you need to put a pack of the film(already peeled from the foil) and your 2x3 film holders in the changing bag. If you are doing a pack of film, you will need 5 film holders. The rest you will do blind. The first and second time doing this will take lots of time, but by the third time, it will be easy and smooth sailing! Your first time doing this, it would be a good idea to practice with some pre-exposed film in the light. Fuji film shoots through the film instead of onto the film, so the side you see with a picture on it is the back side. 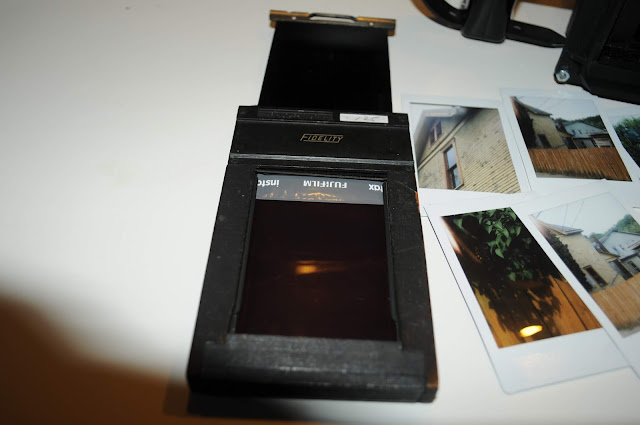 In the changing bag, run the film out of the holder one by one, slipping it out the open end. Be careful not to put pressure on the pod(on the leading end) as it can break and create a mess. Now slip one of the film holders’ dark slide out a few inches. The end of the holder will now fold down. Gently slide the film, pod first, into the opening, careful to make sure it is feeding into the film guides. Orientation is paramount at this stage. You should feel that you are sliding the picture side(smooth side) against the metal plate, and the raised pod and raised ridge side should be facing out. Once the film reaches the stop, press the folded end down tightly and push the dark slide back in. It usually fits tight, and in the case of some packs, it may need a little force. Once you have put the dark slide in, close the lock(usually in the form of a simple bent metal bar) so you can remember which one you have done. Now do the same with the rest of the holders.
Now simply shoot as you would with the regular film. Be careful, though, as this is a highly sensitive film(800asa). 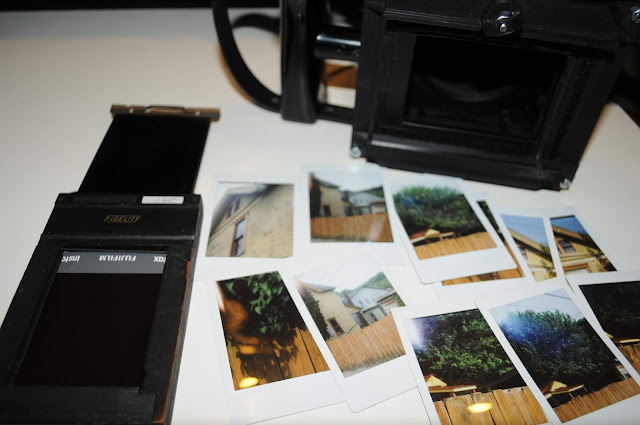 Unload the film in reverse of your loading steps in a changing bag. Slip each piece of film back into the Instax cartridge, ending with the dark slide. Look at the dark slide orientation in the light so you can understand what you are feeling in the dark. Once everything is put back in, take the cartridge out of the changing bag and load an Instax camera. Since the Instax camera is just being used to process the film, put your hand or electric tape over the lens and shoot all of the film out of the pack.
Within a minute, you will have fully developed images you took with your Mamiya/Polaroid camera! 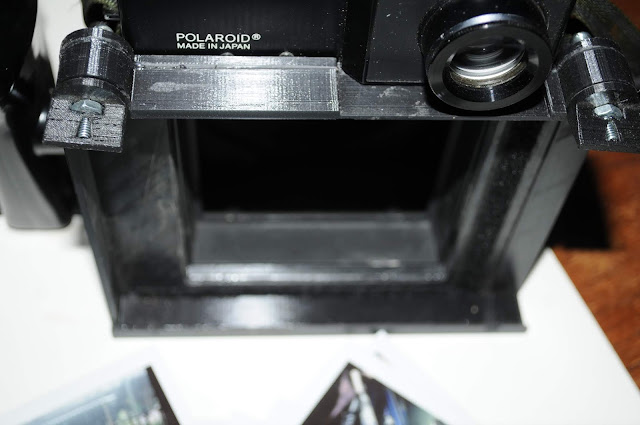 If you have my 4x5 film back, just go thru the same steps. The only difference is you will have to get good at navigating the changing bag! Though 4x5 fits nicely into the holder with zero cropping, the film guides will not touch the image. Here is the extra step: Put a roll of scotch tape in the bag when you transfer the film. Entirely by feel, tear off and tape the film centered on the metal plate under the dark slide. I put tape on the leading and trailing edge(not the pod and ridge). Then close it up as before. Once you have done this a few times it will become easy. 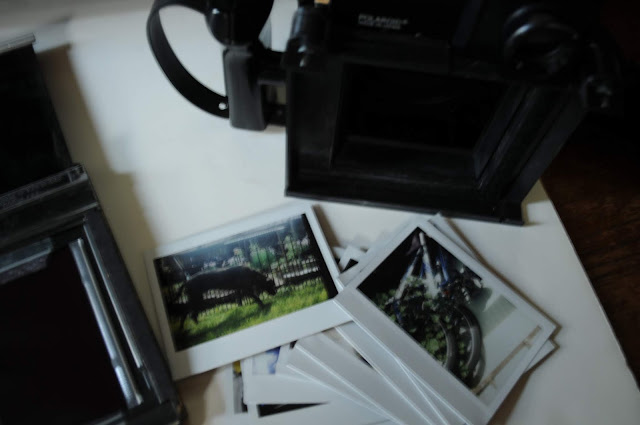 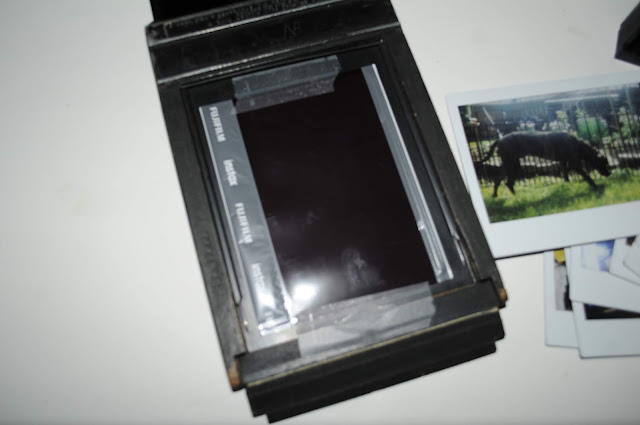 There are pros and cons to each size. With the Instax Mini, it is really easy to slip the film in, and easy to slip the film out. The dark slide, however, feels a bit forced and tight and can cause mild light leaks on the end of the carrier. With the Instax Wide film, there are no evident light leaks caused by the film, and the dark slide slips easily in and out. The downside is that when you are new to it, taping the film on can be tedious and difficult!
Make no mistake- using instant film this way is anything but instant! But it does save you from wet developing your own or sending it away. I, for one, really enjoyed this process and am going to be ordering more carriers! 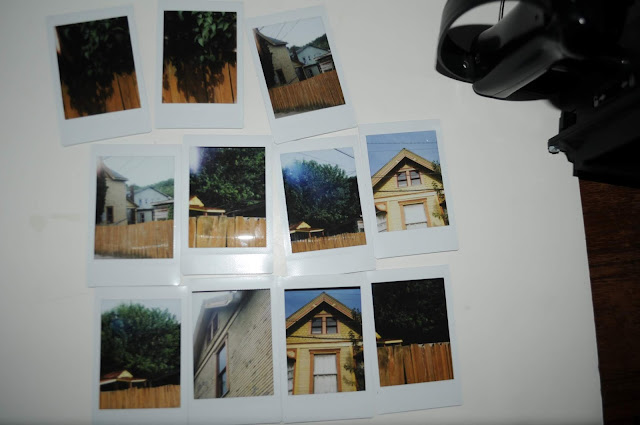 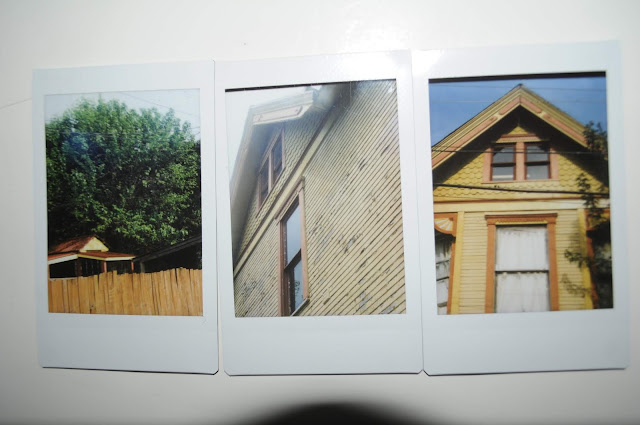 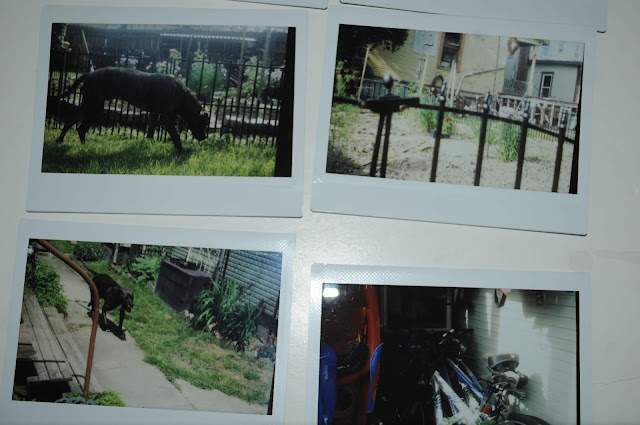 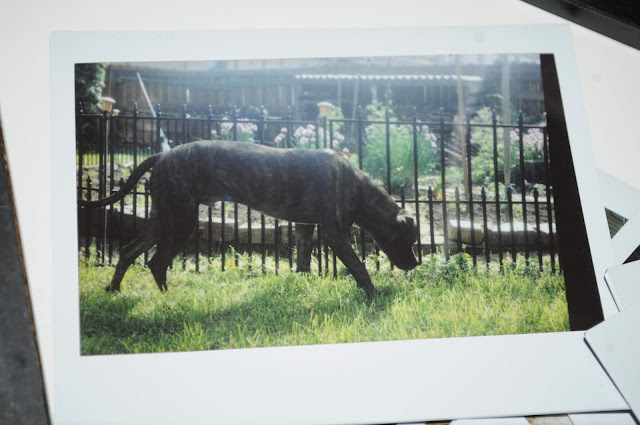 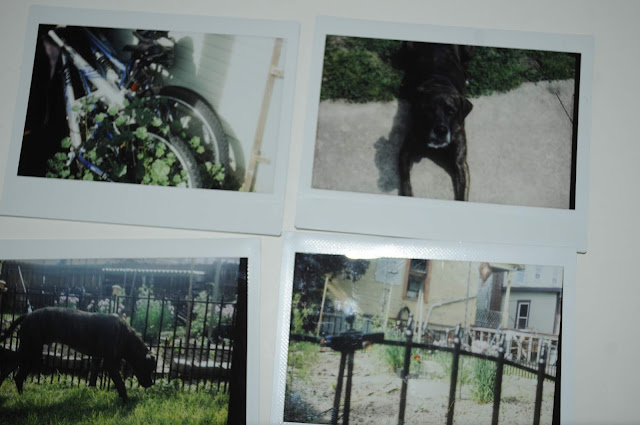 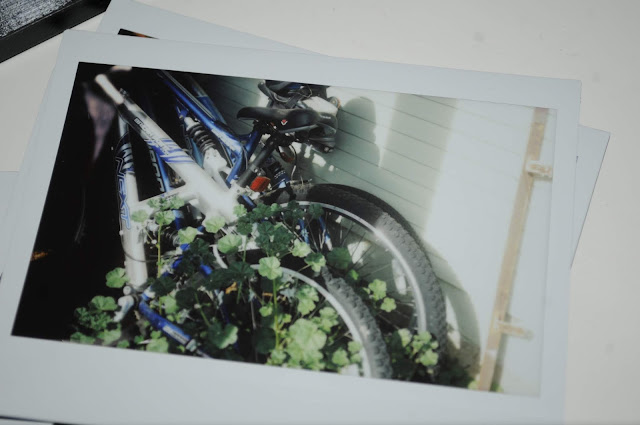