A partial cure for Spectra Scarcity Syndrome. Or: Go wide or go home!

If you have never gotten out that little rubber spatula to get the last of the peanut butter, this post may not be for you. For the rest of us, the idea of leaving any toothpaste in the tube or wasting leftovers is sinful. You are the ones I am writing this for.
Instant film has seen a wonderful little resurgence after digital all but crushed it in the beginning of this century. Thanks to The Impossible Project (now Polaroid Originals), most integral film styles that Polaroid made were rescued. There has been a wonderful photographic/ artistic renaissance around the new SX-70, 600, Spectra, 8x10, and I-Type films.
Lately, the Spectra film has been scarce. As far as I can tell, rumors of bad batches that jam and weak batteries caused Polaroid to slow distribution to a crawl. As of this posting, you can find some Spectra black and white film at some retail outlets.
As you may have guessed from my other postings, I save everything! There is a part of me that is always preparing for the post- apocalyptic future. I like to think it is left over influences of my childhood in the 80s and the nuclear scares of the cold war, but it likely stems from my two decades existence as a working artist/odd jobber/educator in Appalachia( dumpster Christmas is one of my favorite holidays!). When I find a thrift store Spectra camera, I check the film door. If there is an old pack half used left in there, it actually helps my buying decision. Consequently, I have quite a few partially spent packs from all of the instant film types hoarded in my film fridge.
Most old film is fairly useless, but occasionally you get lucky. I would like to share this simple trick with you: This Spectra hack is so you can try your luck with old film. The first thing to go in old film is the battery. The built in battery in the pack is what powers the camera and ejects the film. I have found that I can take a 600 or SX-70 battery from Impossible or Polaroid Originals that has been emptied, and transplant it into the Spectra pack! When you finish a pack of Polaroid Originals/TIP film, there is easily enough battery power to shoot 20 more shots or so. 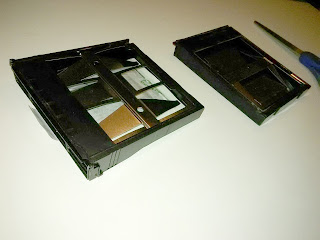 The first thing you need to do is move the film you want to shoot out of the Spectra pack. You will need a changing bag for this, and it is a good idea to have a light tight box to put the film in. This part is really simple- just put the film pack into the changing bag along with a light tight box. Then slide your hands into the bag and start unloading the film by sliding it out of the pack one by one. As you are doing this notice two things: One, notice the orientation, as you will have to put it back in the same way you took it out. Two, gently touch the pods on the end of the film( there are 3 per sheet). If they are hard and crusty inside, set those shots aside. They may be good for other projects but they will never be used as film again. If the pods feel soft, like they may have some viscous fluid inside- those are keepers! Put them in the light tight box. 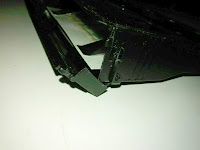 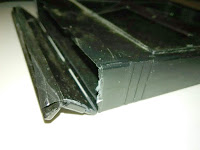 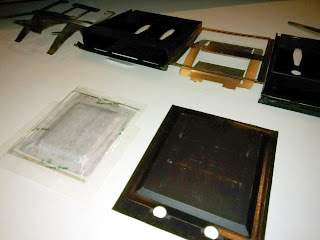 Once you are done, and the film is in the box, remove the Spectra pack from the bag. Now let's get the batteries out of the packs. The Spectra pack front will unsnap and fold down easily to remove both the metal spring and the battery. Pay attention to the orientation of the spring, so you put it back the way you found it. 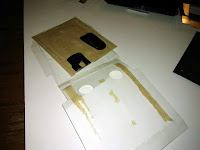 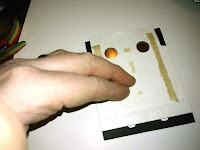 I should mention that this is a battery, and ideally you don't want to short the positive and negative spots, or handle it carelessly in a way that could deliver a bit of a shock(or a scare). Next, remove the cardboard back from the spectra battery. All you have to do is remove a light cellophane and they come apart. Put the cardboard on the backside of the 600/SX-70 battery and line up the battery holes. Now trace the shape of the Spectra onto the 600 with a sharpie.
The next stage seems a bit sketchy, because you will be cutting away the difference. If you carefully marked your 600 battery, you will be safe. Since you will be cutting close to the battery, use insulated handled scissors. BTW, this may be a bit of overkill because the battery isn't really as close to the edge as it looks. 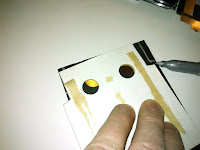 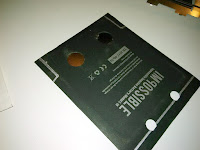 Now slide the fresh battery into the Spectra pack, making sure to slide it into the grooves that secure it and push it all the way in. Put the spring back in and close it up. If you have already forgotten the orientation of the spring, just look for the part that has an indent for the film hook in one corner and match it to the space in the pack for the film hook. Snap the front, and you are ready to load it! 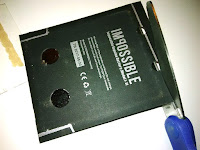 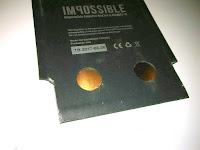 Put it back into the changing bag with the light tight box. Re-load the film sheet by sheet, leaving out the ones with dried up pods. Make sure to put your dark slide in last. Orient the dark slide by feeling for a tiny slip of mylar on the takeup hook corner.
Now you are ready to shoot! 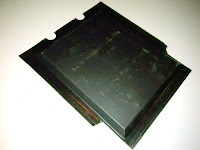 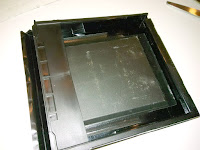 In this demo I chose a pack of 2005 Spectra that I knew was going to be a long shot. I eliminated two for dry pods, and packed the other eight. When you mess with expired Polaroid integral film, do not expect much! I ended up with two interesting shots with 33percent and 70 percent coverage.
Personally I love the “bad pull” look of expired integral film. The harsh orange and purple cast is pretty great contrasted with the golden curtain, and each of the 3 pods can often behave differently giving a striped look. There is always something a little unsettling about the interior space in the image as well.

I , for one, think this was worth it! Who says you can't get blood out of a stone? 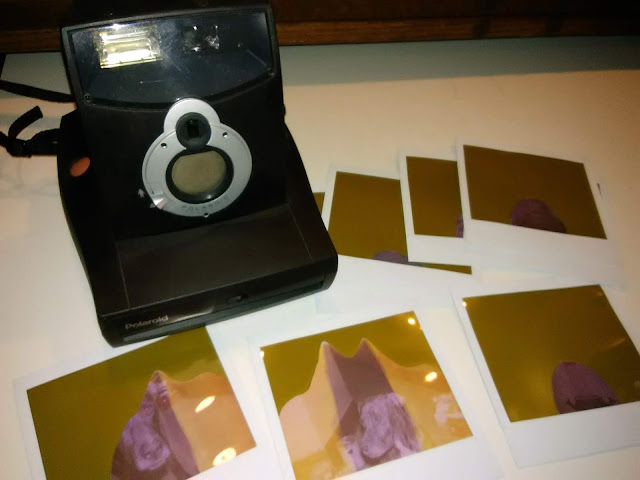